Meet the Council: Implementing Management Practices that Pay Off

The Beef Cattle Research Council (BCRC) is made up of producer members from across Canada, representing and appointed by each of the provincial beef organizations that allocate part of the Canadian Beef Cattle Check-Off to research. The number of members from each province is proportional to the amount of provincial allocation to research.

The following is part two in a series to introduce you to this group of innovative thinkers that set BCRC’s direction by sharing practices, strategies, or technologies that they have integrated into their own operations. Read part one of this series.

Conditions and circumstances across the country may vary but these three beef producers have found value in adjusting common management practices to work successfully on their operation. 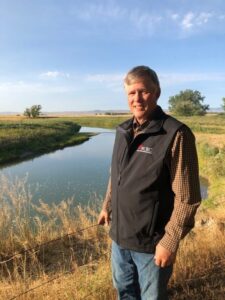 Fred and his family own and operate a mixed farm near Claresholm, Alberta at the base of the Porcupine Hills. Along with a spring and fall calving herd they operate a feedlot, finishing their own calves, as well as around 1,500 head of purchased cattle. They also grow most of the feed required for the feedlot and cow-calf operation.

The spring calving herd is managed very extensively. They combine cattle with a neighbour who manages the whole herd on pasture in the Porcupine Hills. The fall calving herd is managed at home on pasture along with oat-based swaths and corn grazing. If needed, a total mixed ration (TMR) supplement is provided which is possible since these cows are located near the yard site. Fred does point out that managing a fall calving herd is much more hands on but it has worked for them as it allows them to split their labour as well as have animals finished in March and April which gives them access to a different market.

Lozeman notes that the body condition of the fall calving herd does seem to fluctuate more than the spring herd. Since cows are often on green lush pasture when they aren’t supporting a calf, Fred finds that they gain weight easily but because they are in calf and lactating during the cold winter months they often lose condition during that time period. He attributes these seasonal changes in condition to the reason that the cows in the fall calving herd on average get culled sooner than those in the spring calving herd.

Having the ability to follow calves all the way through to the packer has provided Fred with some unique opportunities to base his cow herd culling decisions. When carcass reports are received, each animal is ranked in order of gross revenue (a combination of carcass weight, yield and quality) and that ranking is attributed to the cow. The cow receives a ranking based on the sum of all of her calves. For example, if a cow has had three calves that were ranked number 8, number 22, and number 10 in their respective carcass groups, the cow would be assigned an average score of 13.3. The lower the score for the cow, the higher they rank.  Fred then uses this information to make culling decisions. If a cow in the spring calving herd is in the top 25% of the herd but comes up open, she might be moved to the fall calving herd based on her age and past performance. But a cow that is open and in the bottom 25% would simply be culled.

Fred comes at his operation with a unique perspective. He earned his PhD at the University of Oxford in diabetes research and worked as a scientist in a Nobel Prize-winning lab at the University of Washington. This education and unique experience allow him to look at new technologies and current research with a bit of a different view, and to see their operation in a different light when making management decisions. 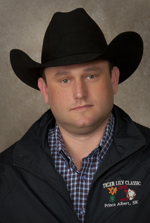 Being able to extend the grazing season and keep cows out on pasture longer has been beneficial for Michael Spratt. Spratt, along with his family, owns and operates a 6,000 acre grain farm and 140 head seedstock Maine Anjou herd near Melfort, Saskatchewan. They also background their own calves as well as do some custom backgrounding.

The area where Spratt farms is very fertile with highly productive land resulting in high land prices, so making the best use out of the land is a priority. Crops like corn are very high risk due to the short growing window and limited heat units available in this part of the province. This is also a high moisture area meaning that crops grow very well but it can be challenging to get them put up dry. For these reasons, the family relies on swath and residue grazing to keep cows out on pasture as long as possible. For over 20 years they have been swath grazing and refining their system.

Since the Spratts also grain farm, swath grazing crops are usually selected based on what seed is left over after the grain crops have been planted. They have found that oats and barley grow best in their location and provide a high-quality feed source. In late October, Michael brings cows in from summer pastures and weans the calves. The cows are then turned out onto a stubble field to graze until the ground is frozen and then will be moved to the swath grazing.

Since they calve in February cows are in their third trimester when swath grazing, but they have found that the feed is usually able to meet the cows’ high nutrient demands. Michael feed tests his swath grazing for nitrates and quality to ensure that it can meet the needs of the cow herd. They have also found that cows seem to have less trouble calving and have attributed some of that to their fitness level due to them having the space to walk around in the extended grazing system.

Swath grazing cows are pastured near the yard site and are given access to about a week to ten days worth of feed at a time using cross fencing. Since cows are located near the yard they have access to water but Michael says that if they have a lot of fluffy, loose snow some of the cows will choose to just eat snow and don’t come down to the yard site for water. By the end of December, they like to move the cows off of the swath grazing and into the drylot so they are closer to home for calving.

When it comes to the drylot side of their operation Michael says that he would not want to do it without their feed wagon. Having a feed wagon with a scale allows them to accurately formulate rations as well as know exactly how much feed each pen is getting. Both backgrounding cattle and cows close to calving get a total mixed ration (TMR) that is balanced for their specific nutritional needs. 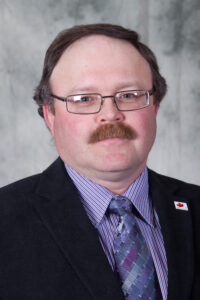 Matt and his family live near Thornloe, Ontario which is located along the 49th parallel and borders the province of Quebec. There they raise 125 Charolais-cross cattle, cash crop 650 acres, and operate a pick-your-own strawberry patch.

The cow herd calves in mid-March with weaning occurring in September. All calves are preconditioned for a period of six weeks receiving all vaccinations, adjusting to eating at bunks, and receiving medicated feed if necessary. Before they sell calves, any replacement heifers they plan on keeping are picked from the group and the remaining calves sell in a special preconditioned sale. Matt says persistence pays off when it comes to preconditioning. His family has been doing some form of preconditioning since the 1980’s and have built up a reputation in the area for quality, high health cattle. Matt says they can usually expect 10-15 cents above market price for their calves.

Bowman is also able to take advantage of some lower quality land to keep cows out of the yard longer. In his area mud is often the biggest issue so having places that the cows can spread out in the fall is a major asset. Bowman has some hilly pastureland that borders bush where cows are kept from October to December. The hills and dense bush make the land inaccessible for other uses, but it makes good grazing land. Matt rolls out hay bales for the cows and lets them bed down in the bush. This allows them to move around more than they would in the drylot and Matt has noticed fertility improvements since moving towards this more extensive system.

During the winter, the cow herd is moved into the yard so that they can be monitored during calving. Before going back out to pasture in the spring, all cows are vaccinated with a modified live vaccine prior to breeding and Matt has seen a very positive impact on overall herd health since implementing this practice. He finds that both cows and calves have less health problems but are also more vigorous out on pasture.

During the breeding season the heifers and second calvers are sorted into their own management group. This allows for better management of their specific nutritional needs but also provides the opportunity for selective breeding. This group of young females is bred to Angus sires while the rest of his cow herd is exposed to Simmental bulls.

Stay tuned for the next installment in this series when we introduce you to another group of Council members and the management strategies and practices implemented on their operations.