Economics of Raising or Buying Heifers for Beef Cow Replacement

The main costs of developing a replacement heifer include winter feed, opportunity cost of the heifer, and breeding costs. These are all impacted by reproductive efficiency.

Winter feed costs. Hay and barley prices are both higher in 2018 due to dry conditions and reduced supplies, increasing the cost of raising replacement heifers. In June 2018, Alberta hay price at $130/ton was 13% higher than last year, and Lethbridge barley was $245/tonne in July, up 23% from last year. Winter feeding costs in Alberta for 2018-19 are projected to be 9% higher than last year, on a per cow basis.

Opportunity cost. The opportunity cost is the market value of the retained heifer calves that could have been sold at weaning. Higher cattle prices have increased the opportunity cost of raising replacement heifers. Heifer calf prices from October to December 2017 averaged $201/cwt, up 10% from $161/cwt in 2016. These are projected to be back down around 2016 levels in 2018.

Breeding cost. The cost of breeding will depend on the choice between natural service or artificial insemination, bull or semen costs, and the reproductive efficiency of the herd.

Reproductive efficiency. The total cost of raising replacement heifers will be impacted by how many heifers must be developed in order to have the correct number calving to replace cows that have been culled. According to the 2017 Western Canadian Cow-Calf Survey, the open rate for heifers was 12%. Using the Replacement Heifer Calculator developed by the Western Beef Development Centre, the costs of raising a replacement heifer are estimated for three groups of producers, namely Low-cost, Average, and High-cost producers, based on different wintering costs and reproductive efficiency assumptions (see Table 1).

Table 2 shows how the cost of raising replacement heifers would change for an average producer under different cattle price scenarios, while holding all other factors constant. It should be noted that while strong cattle prices increased the opportunity cost of raising replacement heifers, increased prices of open heifers sold as feeders can offset some of that impact.

To Raise or Buy Heifers?

The estimated cost per bred heifer for an average producer in 2018 at $1,840 per head is 4% lower than the annual average bred heifer price in 2017 at $1,921 per head. This means there is not much incentive for an average producer to either develop breeding heifers or purchase replacement heifers from a pure cost standpoint and therefore their decision for the fall of 2018 will be based on other preferences. Buying replacement heifers could allow producers to expand their herd quickly, improve herd genetics in less time, or free-up resources for alternative uses. On the other hand, raising replacement heifers on farm allows more genetic control and more control over disease, producers have better understanding of the replacement heifer’s background (Schulz and Gunn, 2014), and heifers are adapted to the environment and management of the operation.

When purchasing replacement heifers, producers should consider the economic value of replacements entering the herd. The value of a bred heifer can be indicated by its Net Present Value (NPV), which is the sum of future cash flows in present value dollars. It is affected not only by cash costs like annual maintenance and economic factors like salvage value and calf prices, but also by productivity factors such as reproductive life span and weaning weight.

Using the Net Present Value of Beef Replacement Females developed by Iowa State University, the NPV of replacement females and the cash flows throughout the animal’s lifespan are estimated with the following assumptions:

The results presented in Chart 1 below shows that the payback period for this heifer is projected to be 8 years, with the NPV being $450/head higher than the purchasing price. This means that the investment has future earnings greater than the current expense.

While the results in Chart 1 are based on an ideal scenario where the animal produces one marketable calf per year for the first eight years, that is not always the case. Charts 2, 3 and 4 show scenarios where the female is open in the second year, or average calf prices are down by 10%, or weaning weight are down 10%; in these scenarios, the future earnings do not cover the initial investment. 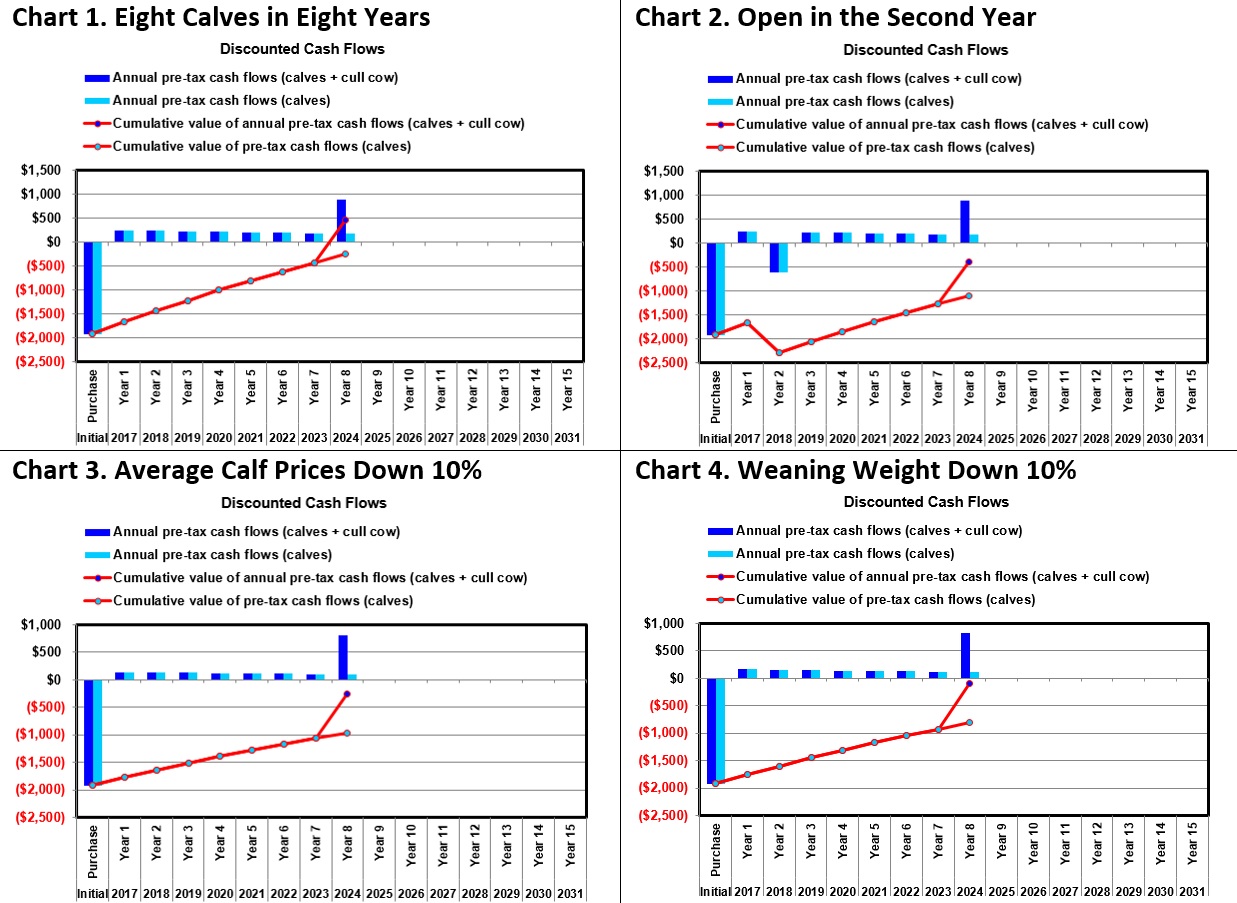