Fall has arrived and focus has shifted to winter feed supplies. Feed prices have dropped significantly from their June highs, but unfavorable weather conditions have left the question of available supplies. Hay prices vary significantly with prices in some areas with short supplies nearly double those in areas with adequate supplies. On the other hand, there could be numerous options for alternate winter feeds this year as some crops originally intended for grain are being harvested as livestock feed. Harvest delays and the likelihood of frost damage has led to quality downgrades. Alberta feed barley prices have dropped 13% from the June peak at $205/ton to $179/ton in September, and market analysts project that the feed grain markets have not hit bottom yet.

In eastern Canada, last year’s fall and winter conditions caused significant winter kill on the winter wheat and hay crops, while spring planting was delayed due to excessive moisture. According to local market reports, the fears of supply shortage have sent Ontario wheat straw prices to $0.06-0.10/lb in some areas compared to the historical range of $0.03-0.04/lb. Cool, wet weather in August and September are also causing harvest delays in the east, with the possibility of more cereal crops going to the feed market.

Winter feed costs are the largest variable cost for cow-calf production. With the increased availability and falling prices of alternative winter feeds in some areas, there could be a good opportunity to reduce wintering costs by using alternative feed sources this year.

How will the use of alternative feeds affect winter feeding costs this year?

Producers can use BCRC’s decision making tool Winter Feeding Rations and Estimated Costs to calculate and compare the costs of main feed ingredients in different rations.

Based on feed ration examples available on provincial government websites, the cost of main feed ingredients in different rations are estimated for beef cows at 1,400 lbs in mid-pregnancy with a body condition score of three.

It should be noted that this analysis only includes the main feed ingredients, while other costs such as vitamins, minerals, yardage, and labour are excluded. 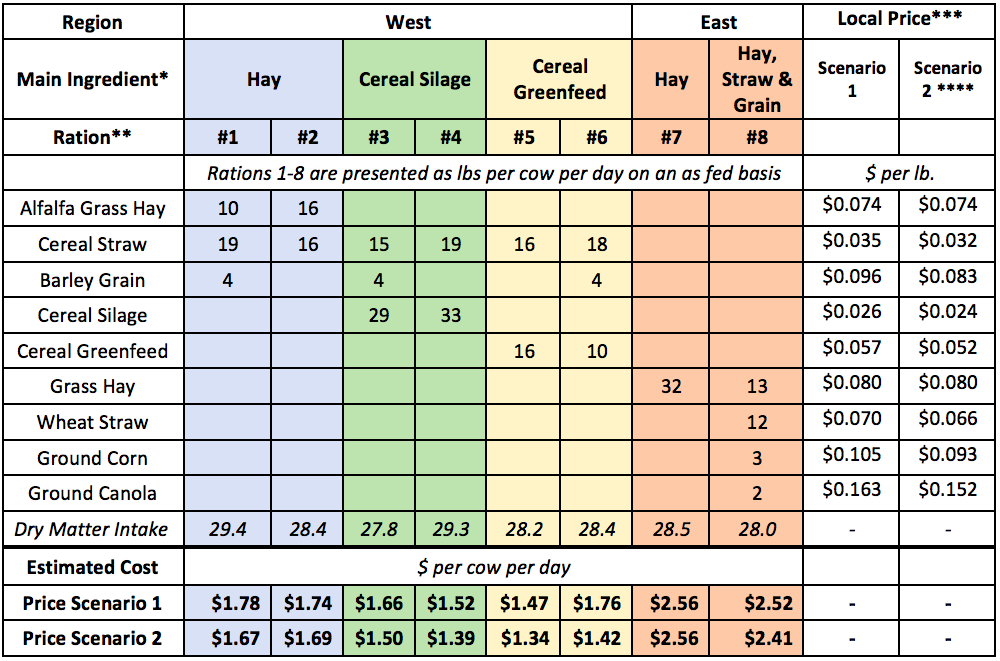 The cost comparisons in Table 1 shows that rations based on silage and greenfeed generally cost less than the hay-based rations in both western and eastern Canada, based on these price assumptions. For example, at current price levels, the main ingredients (alfalfa hay and cereal straw) in ration #2 are estimated to cost $1.74 per cow per day compared to ration #5 (Cereal Straw and Greenfeed) at $1.47 per cow per day, which is a 16% difference. For a 150-day winter feeding period for 100 cows, this represents a $4,000 difference in total feeding costs. If hay prices stay steady and alternative feeds prices go lower, the cost difference between the two rations would expand to about 20% or $5,250 for 100 cows with a 150-day feeding period.

While the above analysis shows the potential cost savings by using alternative winter feeds, producers should consider what their individual feed costs are, along with local feed availability. There are still a lot of uncertainties in terms of regional supplies and prices of forage and feed grains at this point, depending on where you are and how harvest turns out this year.

When considering alternative feed sources, feed testing is important to test for nutritive value to ensure a balanced ration that meets the nutritional needs of the herd. Testing can also identify quality or toxin issues such as nitrates, sulphur, or mycotoxins. Any new feed should be introduced gradually to allow cattle to adjust to the different texture and taste. Feed rations should be adjusted according to the cows’ body condition and weather conditions (see Table 2). 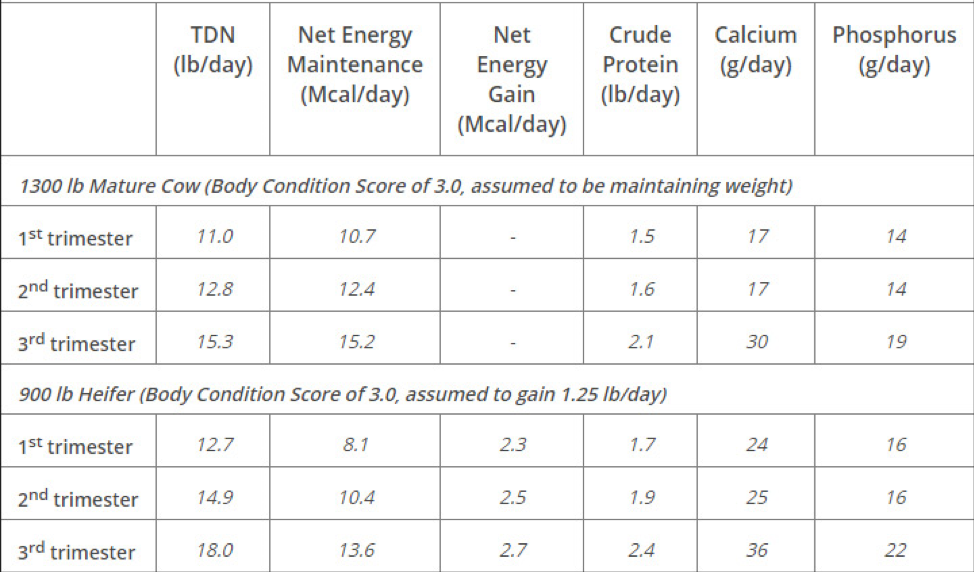 *Values are from www.BeefResearch.ca and were generated using Alberta Agriculture’s CowBytes Program, with assumptions including breeding for June 1 calving, typical Canadian winters, access to shelter from wind and a daily gain of 1.25 pounds for bred heifers in addition to weight gain from pregnancy.